Mock trial in the Supreme Court 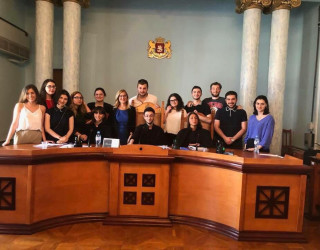 School of Law and Politics follows the tradition to engage students in real cases, for developing their practical skills from the early stage of their studies.

On June 17, Professor Nino Bogveradze, from School of Law and Politcs organized imitated trial in labor law, in the Supreme court of Georgia, for the third year students of Bachelor program.

The dispute referred to legal issues of labor relations, more precisely, agreement between parties was terminated, because of gross violation of the term of the contract.

Students were divided into plaintiff and defendant parties, witnesses for both parties and collegial court with three judges also were presented.

Before the court trial, parties submitted a suit with attached evidences. In one case the dispute was decided in favor of the plaintiffs, and in the second case in favor of the defenders. The process was based on competition in compliance with Georgian Legislation.