Campaign from Independence to Freedom - 100 Years of Republic’ Takes Start 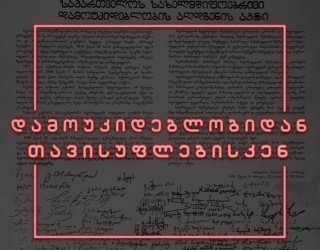 GIPAs mandate is to bring up responsible and free generation with capacity of creating new reality, pursuing democratic values, rule of law, acting in accordance with human rights and state interest. We do believe that these people will gain independence and create independent environment in our country.

From July 16, GIPA joined the campaign From Independence to Freedom - 100 Years of Republic’ and launches a week dedicated to the 100th anniversary of the declaration of the First Independent Republic of Georgia – the event is held specifically for our graduates.

All interested individuals are allowed to attend the event, which will be held in the National library of Parliament of Georgia, in the President’s palace and Georgian National Youth Palace. Public lecture series will be started by Georgian writer, Giorgi Kekelidze on July 16, “People of 20th  century and their place in the independence of our country” registration: https://goo.gl/NLVobf