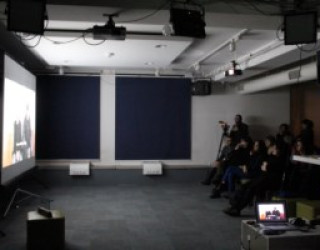 On November 20-21, Student’s documentaries GIPA DocU 2014, was held in the third time and has the annual face.

The event was attended by the US Embassy, USAID-, IREX Georgia, Representatives of film-centre and other specially invited guests from the partner universities, embassies, public, civil society and the private sector.

Films, part of which was financed by IREX Georgia, the students filmed within the documentary film’s class, headed by Nino Orjonikidze and Tiko Nachkebia.

On November 21 at 19:00 jury named the best film, which included the following:

'LEFT INSIDE' by Sona Simonyan
'SLAVIK'S PROTEST' by Anushik Avetyan